Can a change in body odor indicate a neurological problem? 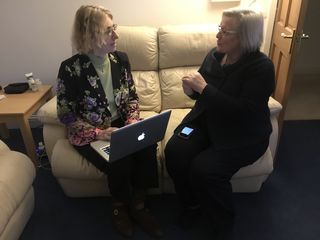 As my husband, Eric Haseltine, and I landed in Edinburgh, Scotland one month ago, we were welcomed by heavy black clouds and relentless rain. But the temperature was warmer than we expected and as we picked up our rental car at the airport, I got rid of the three heavy winter coats I had put on top of each other to protect me from the cold and put them on the back seat. As our GPS guided us towards Edinburgh’s old town, my eyes opened widely with awe at the discovery of the cobblestones streets with old dark stone buildings leading to a beautiful castle. It was like getting back to Medieval times and I felt intrigued and surprisingly at ease, discovering as Eric and I grabbed a bite to eat, that the Scots were extremely friendly. Our plan was to drive to Perth to interview Joy Milne, a retired nurse who can smell Parkinson’s Disease (PD), then head back to Edinburgh to interview Dr. Tilo Kunath who does research on neurodegenerative diseases.

The particular smell of Parkinson’s Disease and its possible cause

When we arrived at Joy’s house in Perth, Joy welcomed us with open arms and her delightful two dogs brought us their favorite toys. After playing with Joy’s dogs, Eric, Joy and I talked about Joy’s ability to detect Parkinson’s Disease by smell only. As we uncovered Joy’s synesthetic ability to draw as well as to smell, Eric asked if she could draw the different stages of Parkinson’s Disease that she could smell. She did and Eric describes this in his PT blog on synesthesia.

Joy described how the musky, greasy smell of PD started 10 years before her husband Les, an anesthesiologist, got diagnosed with PD. Les was only 33 years old when Joy started smelling this change and the body odor grew stronger year after year. More than 10 years later, at the age of 45, Les was diagnosed with PD. Joy found, from attending PD support meetings, that she could detect the same smell in other PD patients.

Interestingly, the musky smell that Joy senses doesn’t come from the sweat glands under the arms, but from the sebaceous glands, typically on the back of the neck and on the forehead and scalp, giving a waxy appearance of the skin and shiny greasy spots in the hair. The area around the genitals is also affected with increased lubrication and smelly discharge. There is also increased salivation.

Research done by Valentina S Arsic Arsenijevic and colleagues, published in BMC Dermatology in 2014 shows that the change of neurotransmitters secreted by the neurons affected by PD could stimulate sebum production by exocrine glands. This change in sebum combined with an accumulation of Lewy bodies in the skin could be the perfect media for certain lipophilic bacteria and yeast (Malassezia yeasts for example) to thrive, changing the person’s skin microbiome. Changes in the microbiome, in turn, create the unique smell of PD and explain why the smell gets stronger each year, as microbial colonies proliferate with the worsening of the disease.

Joy is now working with Professor Perdita Barran at Manchester University to confirm that what Joy smells is truly linked to PD. Barran confirmed that Joy can accurately separate the smell of PD patients from non-PD patients. So far, out of more than 50 samples, Joy has been 98 percent accurate.

Now Barran is trying to determine, via mass spectroscopy, what Volatile Organic Compounds (VOCs) make up that PD smell. This hunt for VOC’s is extremely challenging because, out of each skin swab, there are up to 9,000 different VOCs. Barran’s study is ongoing, but as of today, Barran, with the help of Joy, has isolated 10 compounds that could be the source of the PD odor. Three of these compounds come from specific types of yeast. It will take a few more months before Barran’s results are published.

Joy Milne might not be the only human with a special gift for smelling PD. Other people have come forward that describe how they too can detect the same smell out of PD people, and what they describe sounds exactly the same as what Joy Milne describes.

The importance of an early diagnosis

If PD patients could be diagnosed early, perhaps 8 to 10 years before their first tremor, thanks to the specific smell their body exudes, could they benefit from a treatment that stops and even reverse the neuronal damage?

None of the PD treatments widely available right now can stop nor reverse neuronal damage. But as we will see in my follow-up post, “New Hope for Parkinson’s Disease” with an interview of Tilo Kunath at the University of Edinburgh, new, possibly very effective treatments are currently being tested in clinical trials all over the world.