Future treatments for Parkinson’s disease and other diseases

Why are there more cases of Parkinson’s disease in the Midwest and Northeast of the USA than in the rest of the country?

Why are there many more people with symptoms of Parkinson’s disease, Alzheimer’s disease and Lou Gehrig’s disease in the island of Guam compared to the mainland USA?

What new treatments are in clinical trials for neurodegenerative diseases?

Are you sure that 100% certified organic foods you eat are free of neurotoxic pesticides?

My husband and I found answers to those questions when we went in early January to the Scottish Centre for Regenerative Medicine at the University of Edinburgh to visit Dr. Tilo Kunath to interview him about his fascinating research work on Parkinson’s disease (PD) and other neurodegenerative disorders. 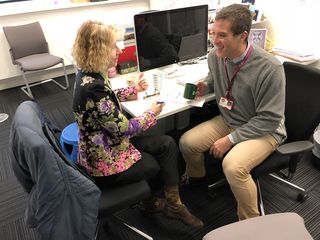 As we entered the modern building, we met a young, dynamic and very pleasant Dr. Tilo and as we followed him up the stairs to his bright office, we felt a shiver of excitement being at a crossroad between the past, the present and the future of neurodegenerative diseases.

Dr. Tilo Kunath explained his passion for making neurons from stem cells and using preformed protein fibrils to mimic neurodegenerative diseases so that new molecules and therapeutics could be tested for their ability to reverse the damage to diseased neurons.

First, let’s look at some Parkinson’s disease statistics published by the Parkinson Association of the Carolinas:

There are over 1 million people suffering from PD in the USA and 7 to 10 million worldwide, with 60,000 new American cases identified each year. PD affects males 1.5 times more than females and the incidence of PD increases with age. Yet, more than 5% of patients that are diagnosed with PD are between the ages of 20 and 50.

Allison Wright Willis and colleagues at the University of Pennsylvania Medical School found that in US Medicare beneficiaries, PD cases are non randomly distributed in the Midwest and Northeastern US (Neuroepidemiology 2010).

We’ll see below how this could be explained.

So far, all the treatments for PD are purely symptomatic and there is no proven neuro-protective treatment.

So, it is crucial to find new and effective treatments for PD. In order to do this, we need to better understand what happens in the brain of people who suffer from PD.

Since it has been 200 years since the first description of PD by Dr. James Parkinson, research centers in the USA, Canada, Israel, Mexico, Spain, France, Germany, Italy, UK, Denmark, the Netherlands, Greece, Australia and China collaborated for a 2017 issue of Movement Disorders in a comprehensive review: Past, Present and Future of Parkinson’s Disease: A Special Essay on the 200th Anniversary of the Shaking Palsy.

That comprehensive review describes the possible importance of a protein called alpha-synuclein which can misfold, and in doing so, create aggregates of amyloid-like substances called Lewy bodies. Those Lewy bodies accumulate in the gut and the brain of PD patients. In the brain in particular, the Lewy bodies propagate as if they were prions (smallest infectious particle made of protein only) and slowly invade more and more brain tissue over time.

But problems with alpha-synuclein accumulation and misfolding are not only found in PD. They are also found in Lewy body dementia and multiple system atrophy which are neurodegenerative diseases targeting multiple types of neurons.

There are many possible triggers for alpha-synuclein to accumulate and misfold. Among those:

—- Head traumas: In 2017 Marcel Levy Nogueira et al demonstrated in the Journal of the Alzheimer’s Association how mechanical stress increases brain amyloid beta, tau and alpha-synuclein concentrations in wild-type mice. As mice physiology is very close to human physiology, it is likely that repetitive violent head traumas can trigger alpha-synuclein misfolding in humans.

—- Pesticides: Pan-Montojo and colleagues, in a 2012 article in Scientific Reports showed that environmental toxins such as pesticides could initiate the progression of Parkinson’s. An example is rotenone, an organic, odorless, colorless isoflavone that is in the seeds and stems of several plants and acts as a pesticide, insecticide and piscicide. Rotenone has been used as an organic pesticide dust for gardens and is still being used by US government agencies to kill fish in rivers and lakes. Studies show that there is a 6-fold increase in Parkinson’s cases in areas near where rotenone is used. In early 2018, the USDA organic board proposed to remove rotenone from the list of organic products allowed in organic farming.

The use of particular pesticides could explain why there are more cases of Parkinson’s disease in the Midwest where there is typically more farming than in the rest of the country.

—- Cycad seeds (seeds produced by Sago Palms) which contain 3 toxins and are commonly eaten by people in the island of Guam. In Guam, people use Cycad seeds to make flour. As a result, they suffer from Guam disease which is characterized by symptoms similar to those of PD, Alzheimer’s disease and Lou Gehrig’s (amyotrophic lateral sclerosis) disease. In Guam, the incidence of Parkinson’s disease is 100 times higher that in the mainland US. Humans are not the only species that likes Cycad seeds. Dogs do too (gives liver toxicity) and also bats. As a consequence, in places where people eat bats, there are more PD cases.

—- Genetic predisposition is also very important: Some people have inherited genes that make them more susceptible to neuro-degenerative diseases.

Possible ways to cure PD and other neurodegenerative diseases

—- Stem cell transplants: In human clinical trials, Prof Roger Barker and colleagues at the University of Cambridge are currently transplanting fetal dopamine neurons into the brains of PD patients in order to reduce severity of symptoms (the TRANSEURO trial). The results of this trial are not published yet.

—- Drugs: Dr. Tilo Kunath is currently working with a company from Belgium to find a way to reduce the accumulation of misfolded alpha-synuclein protein. Other companies are also creating drugs that could possibly act on the misfolded alpha-synuclein. One of these companies, Roche in association with Prothena, is in a Phase 3 clinical trial with a molecule that proved to be very promising in Phases 1 and 2. Participants with early PD are currently recruited for a study (the PASADENA study) that started in April 2017 and will end in 2020, taking place in 47 centers all over the world among those, USC in Los Angeles.

It is interesting that we psychologically feel safe knowing that there are 100% organic farms out there producing 100% organic foods. Yet, some 100% naturally organic pesticides like rotenone are extremely neurotoxic and can trigger the start of a neurodegenerative disease.

We should take action to ensure that no neurotoxic organic product is being used on the fruits, vegetable and grain crops destined to human and animal consumption not only in the USA but all over the world.

In addition, we should stay away from breathing non organic insecticide products and other environmental toxins and we should protect our children from traumatic brain injuries in violent sports, especially if there is a genetic predisposition to neurodegenerative disease in the family.

Regular physical exercise (without violent brain traumas) and caffeine consumption have also shown to be protective in several studies.