“Did you have red Tabasco sauce with your last meal?” Joy asked me as my husband and I were driving her from San Francisco to Chico, California.

I was surprised by her question. I did have red Tabasco sauce the night before, but not more that 4 drops. How could Joy have smelt it? “Yes”, I said, “but it was such a minuscule amount”.

“I can smell it” she commented laughing.

The 3-hour car trip from San Francisco to Chico, California was off to a good start. Joy was definitely an impressive super smeller.

In January 2018, my husband and I flew to Scotland to interview Joy. At that time, a thought hit us: Since Joy was a super-smeller, could she also have the ability to detect cancer by smell only?

We knew there had been published studies citing Dina Zaphiris’ dogs (In Situ Foundation) from Chico, California, describing how Dina’s trained dogs could detect cancer in breath and urine samples of cancer patients. Many other studies were published but no study had been done exploring humans’ ability to smell cancer, for an understandable reason: No human could have a nose as sensitive as a dog.

However, Joy did mention that during the years she worked as a nurse, she noticed that people with cancer had a particular smell.

What if Joy could detect the smell of cancer? What if she could answer many questions such as: What does cancer smell like? Is it the same smell for different cancers or is it different smells? Does the smell change when cancer metastasizes?

To address these questions, and more, my husband and I flew Joy from Scotland to San Francisco in August 2018, then drove her to the In Situ Foundation in Chico to sniff both cancer and healthy human breath samples.

As we arrived in Chico, my body shivered with excitement. We were about to dive into experimental territory.

Upon arrival at the In Situ Foundation dog training facility, Joy requested to sniff unused masks so that she could identify the basic mask fabric smell and exclude it in future sessions. She got her request granted.

After a quick lunch, Joy sat at an empty table and placed a bag of coffee beans to her left (she uses the smell of fresh coffee beans, then the smell of her own forearm to bring her sense of smell back to neutral) and a bowl of spring water and facial cloth to her right.

She was ready for the first session. 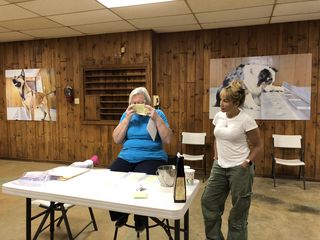 It was time to test if Joy could detect cancer in random breath samples.

We selected 5 “healthy masks” and 5 “cancer masks”, mixed them up, and asked Joy what she could smell.

Taking her time, sniffing the inside and outside of each mask, Joy finally said that 3 of the 10 masks she was smelling smelled like cancer. As a matter of fact, for those 3 masks, she had an immediate body reaction when opening the zip lock bag which contained the masks. “Those 3 masks”, said Joy “have a creamy yeast smell but as the volatile compounds get in the air and become subtler, more layers reveal a mucous and salt smell. The other samples don’t have that smell.”

When we looked at whom those samples belonged to, we realized that the 3 masks Joy strongly reacted to, were all 3 cancer masks. The 4th and 5th mask were not viable. Another sample was indeterminate. The other 4 samples were identified as healthy masks.

The questions worth asking are: Is the creamy yeast smell directly related to cancer or could it be related to something else? And is what Joy describes the same smell as what the cancer sniffing dogs detect?

What can we make out of this experiment?

All we can say is that results are promising and that it may be possible that Joy is able to detect cancer by smelling masks in which people have breathed but double-blind studies on a high number of samples are clearly warranted.

Let’s see which studies have been published so far.

Previous research on cancer detection by smell only:

There are many published articles on cancer detection by dogs using breath samples, urine, blood and skin samples.

Abdah-Bortnyak and colleagues published in the 2009 issue of the Journal of Clinical Oncology that using gas chromatogaphy linked with mass spectrometry and electronic nose for breath samples analysis, they could differentiate between healthy and cancerous breath with a more than 92% sensitivity and also between the breath of patients with different cancer types (40 healthy controls, 30 people with lung cancer, 15 with breast cancer, 20 with colon cancer, 5 with prostate cancer and 4 with head and neck cancer).

In France also in 2011, Jean-Nicolas Cornu et al. published in European Urology Journal the study of one dog’s high ability to detect prostate cancer from the smell of urine.

In Sweden in 2013, György Horvath and colleagues published a study on 2 dogs’ ability to detect ovarian cancer from smelling one drop of blood plasma. The researchers studied 42 ovarian cancer patients and 210 healthy controls. The dogs detected the cancer with 97% sensitivity and 99% specificity. In part 2 of the study, the dogs were able to accurately predict that 3 patients would have recurrence of their ovarian cancer.

In Italy in 2014, Gianluigi Taverna studied 2 German Shepherd’s ability to identify prostate cancer in urine samples. Dr. Taverna studied 362 patients with prostate cancer and 540 healthy controls. Sensitivity and specificity were very high (over 97%) for both dogs. The results were published in the 2014 Journal of Urology. Similar studies were done in the United States.

Now, Professor Jouko Vepsālāinen from the university of Eastern Finland is conducting studies on the smell of cancer and thinks that the answer to that smell may be polyamines.

Johanna Riikka Niemi MD and her team (Tampere University Hospital in Finland) published in the September 2017 issue of the International Journal of Gynecological Cancer that using liquid chromatography in tandem with mass spectrometry to analyze patients’ urine, they found that a type of polyamine called N1 N12 diacetylspermine was able to distinguish benign and malignant ovarian tumors. This N1 N12 diacetylspermine was more elevated in stage 3 and 4 versus stage 1 and 2 and also was more elevated in high malignant potential versus low malignant potential.

Lorenzo Ramirez and colleagues in the 2018 issue of the Journal of Clinical Oncology showed strong evidence that using a combination of trained dogs with gas chromatography in tandem with mass spectrometry detects ovarian cancer from patients’ blood.

What can we learn from all this?

It seems that there is a specific smell to cancer, even at an early stage, as indicated by dogs, artificial nose, gas chromatography and mass spectrometry.

This is a major finding because smell could be a non-invasive early indicator of cancer which would allow us, physicians, to treat cancers early before they metastasize which would give most cancer patients the opportunity to be completely cured thanks to an early treatment.

Gordon Shepherd wrote in 2004 in PLOS/Biology that humans are not poor smellers but rather are relatively good, perhaps even excellent smellers. Even though they have a low number of olfactory receptors in the nose (6 million for humans versus 300 million for dogs), they also use the back of their throat and many parts of their brain to identify many complex smells.

As for Jess Porter and colleagues, they prove in the 2007 Nature Neuroscience Journal that humans can scent-track just like dogs do and that they improve with practice.

In fact, there are quite a few anectodical online posts from random people who describe the “cancer smell” as a “sweet fruity sickly” smell while others describe it as a “dead fish” smell but no research was done on those.

Could that “sweet fruity” smell be related to the “creamy yeast smell with layers revealing a mucous and salt smell” described by Joy? And could that smell be the smell of polyamines that Professor Vepsālāinen and Dr. Niemi in Finland are studying?

As a matter of fact, it would be very interesting to see if cancer sniffing dogs and also Joy alert on the smell of polyamines, specifically the N1 N12 Diacetylspermine mentioned above.

Could I, myself, smell cancer?

As I sniffed the masks that had belonged to cancer patients and compared them to healthy ones (I did this after Joy had finished her experiment), I could detect a “creamy yeast smell” in “cancer masks” that I didn’t detect in “healthy masks”.

But again, was it the smell of cancer or not?

If it were, could anybody with the right training detect the smell of cancer?

Maybe all we need is practice paying attention to what we smell. Most of us are so visual that we ignore the smells that are literally in front of our noses.

So, if we practiced sniffing different smells every day, some of us could work our way to detecting cancer by smell.

What simple exercise can we start with?

A simple exercise each of us can do today to save lives:

Be aware of your own smell (the smell of your skin, of your breath, of your urine…).

Be aware of the smell of your loved ones, your children, your partner, your parents, your friends (their breath, their skin).

If you notice any radical and consistent change (over several days and weeks) in the way your loved one smells, or if somebody tells you that your smell has changed, contact your doctor for a checkup.

Not only could you detect the scent of a new lover on your partner (that’s one of the downsides of sniffing), you could probably detect if he or she is becoming diabetic, is developing Parkinson’s disease or a deadly cancer.

Then, you could save a life allowing an early medical referral, an early diagnosis and a life-saving early treatment.

To paraphrase Yogi Berra who said “you can observe a lot just by watching”, when it comes to odors important to health, we can say “you can smell a lot just by sniffing.”